It's finally here! The 2013 body paint calendar is finished and ready for sale! 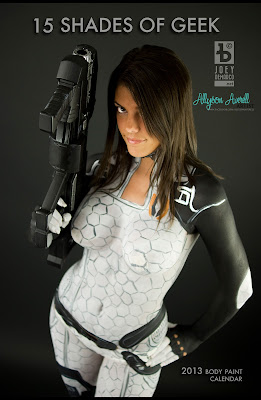 Artwork by Ally and I have been working on this calendar for over 6 months and we are very pleased to announce its arrival.

You can purchase the calendar on my etsy page here. All specific info relating to the calendar can be found there.

If you like what you see and wish there was more, you can check out my site here and order additional prints of each model's shoot. Multiple images of each model are available in a variety of sizes for very reasonable prices.

A very huge thank you to everyone who made this happen. Please follow the links below to show the models and artist some love.

More images, as well as links to the models, after the break.

Read more »
Posted by Chewblogga at 9:57 PM No comments:

As you may or may not know, I recently returned home from a trip to Disney World. If you've ever been lucky enough to go to Disney World you know there's a special kind of magic that is only found there. Magic that makes you feel like a kid again.

At almost 31 years old, I am a child of the 80's. And as a good deal of my body paint projects would suggest, I am still a fan of all things 80's. In my opinion there was no better time to be a child. Safety had yet to be invented, toy companies created entire TV series to sell you their new product, and Hollywood suffered from an excess of... everything. It seemed like if you had an idea, not matter how ridiculous or over-the-top, there was someone out there willing to produce it. What a decade!

Captain EO is a perfect example of the ridiculousness of the 1980's. It's like traveling back in time to 1986 and getting a glimpse of another magical world - one fueled by cocaine and excess. I don't know who initially thought of the idea, but I do know that George Lucas, Francis Ford Coppola, and Michael Jackson thought it was a good idea. I, for one, whole-heartedly agree.

If you've never been luck enough to see Captain EO you are in for a treat! Come along with me while I take you on the journey of a lifetime. Make yourself comfortable - this is about to get bodacious.

Captain EO opens with a killer voice over about a "universe of good and evil" where a "rag tag band" struggles to bring freedom to a galaxy of despair. (Somehow this is not Star Wars.) As the camera pans we got a fantastic shot of what can only be described as the offspring of Jabba's Sail Barge and a fish.

Cut to the interior where we get to meet the crew, populated by rejected character designs from The Labyrinth and a Max Rebo wannabe named "Hooter."

Hooter is clearly the mentally challenged "quota"hire, since he messes everything up at every possibly chance he can get. After Captain EO appears, he and his crew have a brief discussion on whether to go into battle or clean Hooter's bunk. Captain EO gives a stirring speech about how they are not "screw ups" and this time they'll prove command wrong. To battle it is!

At this moment a knock-off Klingon Bird of War arrives and the crew must get to their stations to engage in some sweet evasive maneuvers. During the battle it's made clear that Hooter ate their map and therefore they cannot locate the beacon they are trying to find. (It's interesting to note that in a space faring society, they still apparently use paper maps for navigation.) They have no choice but to evade the pursuing ship in the Death Star trench.

After strolling around the Planet Junk they are captured by trash aliens and taken to the H.R. Giger inspired Borg-like creature known as "The Supreme Leader." She clearly hates the crew, as she orders them to be turned into trash cans and Captain EO to be tortured for 100 years. He agrees, but first kicks some game to her, telling her that he has the gift to unlock the beauty within her. When she asks to see this gift he gives her the best response ever: "Not only see, your Highness, but hear!" This is when it gets really good.

His robot general transforms into the most fantastic 80's electric drum set you've ever seen, and Max Rebo's piano shows up for some reason. The entire sequence is like Pee-Wee's Playhouse meets the Transformers. The Supreme Leader is initially digging these sweet jams (who wouldn't be) until Hooter screws it all up. He quickly fixes it, but not before she sends in the guards. What is Captain EO to do?!

Dance his way out, of course! The rest of the video really needs to be seen and not recapped, since no mere mortal words can possibly do it justice. I will say that it involves some elaborate dance choreography, homo-erotic undertones, a killer beat, whips, plot twists, glowing rainbow shirts, moonwalking, and wall Frankensteins that turn into Tron dancers.

Will two different songs and dances be enough to change her world? I don't know, but I sure hope so! Make sure to watch for the surprise WTF-is-she-doing-here cameo at the end.

Honestly, this video is amazing. I turned to Stacey half way through the show at Disney and said, "this is the greatest thing I've ever seen" and meant it. Her response was simply, "this is awful." I don't know how anyone can watch this and not fall in love with it. It's too amazing. Too precious. This was a real thing, that happened in a real world. It was not done ironically or comedically.

(True story - I immediately purchased both these songs on iTunes when I got home. I have no regrets.)

Posted by Chewblogga at 6:12 PM No comments:

Samantha and I are both huge "Firefly" fans, so when she asked me if I wanted to do a shiny new "Firefly"-themed shoot with her I couldn't say yes fast enough. I'm no Ben Tian Sheng De Yi Dui Rou! Sam was given a free T-Shirt from Geekchic Tees for her "awesome geek work" and she wanted to do a shoot as a thank you to them. Luckily, I had my very own browncoat and gun. If anyone can give Nathan Fillion, Captain Tightpants himself, a run for his money it's Sam. She somehow made Malcolm Reynolds even sexier, which was previously thought to be impossible. But you know what they say: No power in the 'Verse could stop us from trying. It was really awesome to be able to do something "Firefly" related, and we hope you enjoy our little shindig. 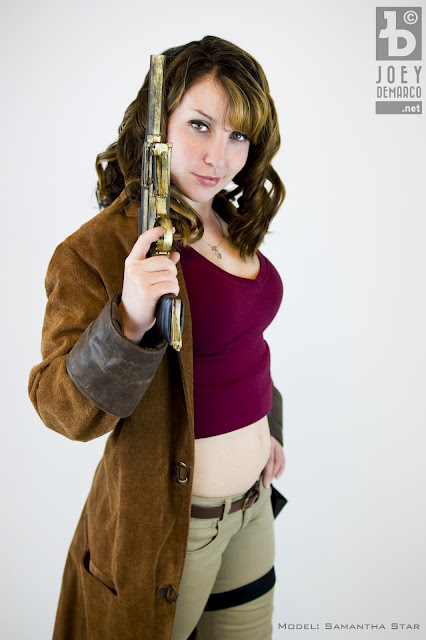 This shoot is one of my favorites from the whole calendar series. Ally never ceases to amaze me, and this was no exception.

I was there for the painting, and I still have to tell myself that Abby isn't actually wearing clothes. The detail in the top gets me every time.

And talk about perfect casting! I couldn't have found a better Harley Quinn if she jumped out of the game herself!

I'm beyond pleased with this shoot, and I hope you enjoy it! 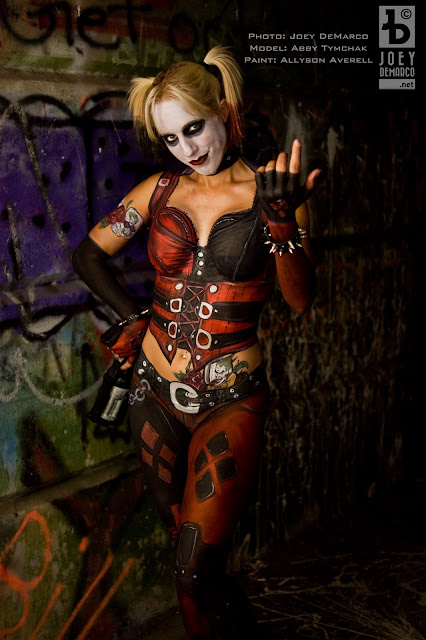 See more after the break:

Read more »
Posted by Chewblogga at 9:38 PM No comments:

Preview shot of Samantha Star as Green Lantern for our body paint calendar. This shoot was done on the fly. Initially, we had two models today and were going to do a Star Wars themed shoot. One of the models couldn't make it last minute, so we scrambled to come up with an idea. This one came together because we wanted to try out the glow-in-the-dark body paint that reacted to black light.


Other than a basic curve adjustment, and a little embellishment on the ring itself, this photo is not photoshopped. That's how the paint looked.

HUGE thank you to Sam for being so patient and flexible. And, as always, to Ally and Ashley for the amazing job they did.

And a special thanks to The Comic Station for supplying us a ring on such short notice, AND for knocking off a few bucks because it was a White Lantern ring. Top notch guys. If you live near Haddon Heights, you should check them out.

Seriously, this shoot turned out great. I guess sometimes things really do happen for a reason. 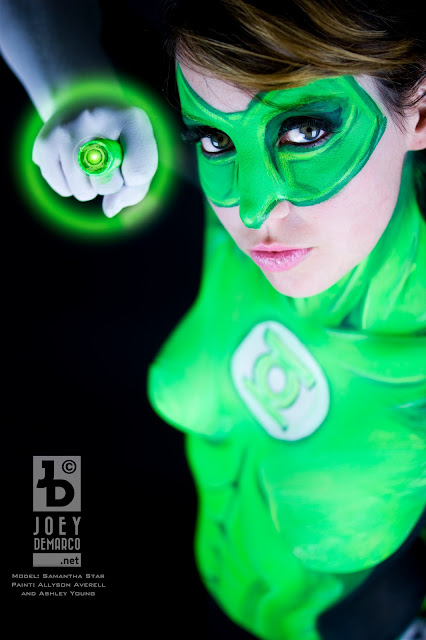 More after the break:

I don't know about you, but I think Crystal Quin makes one heck of a sexy Batgirl. 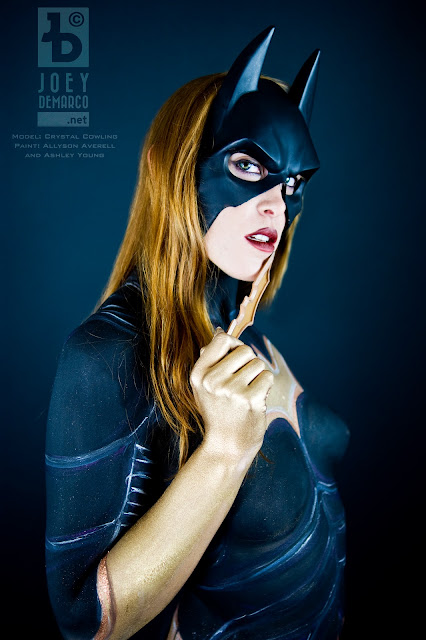 More after the break:

Read more »
Posted by Chewblogga at 9:13 PM No comments:

Hey bub, check out these killer Wolverine body paint images featuring the fierce Sarah Miranda. Hugh Jackman's got nothing on her. 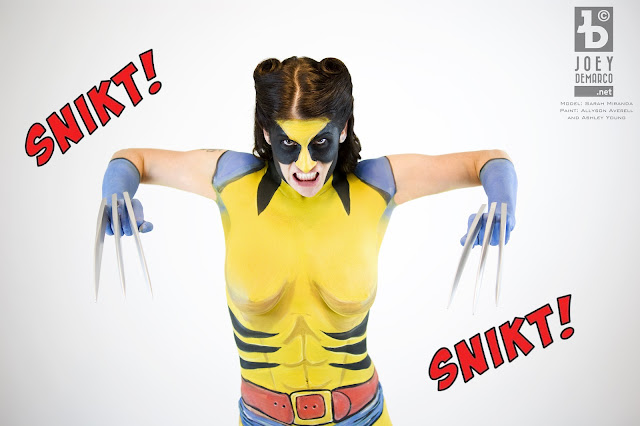 See more after the break: